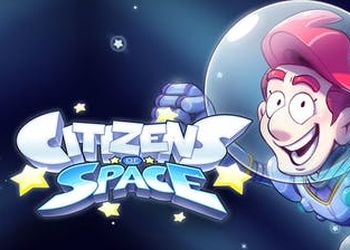 In 2014, Studio Eden Industries released funny humorous jrpg Citizens of Earth, which contained a lot of reference to the cult EarthBound And Chrono Trigger, But I remembered primarily the main character – cowardly and stolen, but in my own charming vice president of the fictional city. In battles against our own citizens who arranged in the streets of protests (as well as against aliens, hipster robots and deer with the phone instead of horns), he himself did not participate, and put his mother his mother against them, a big amateur series;native brother trading with chests and rolls;conspiragologist who rushed into enemies abducted from the State Department documents.

Five years later with support SEGA Sequel came out, which for all the laws of development and progress sends us to recruit their team no longer on Earth, but in space. Especially since our blue planet … disappeared in an unknown direction.

IN Citizens of Space We again play for a self-lean author of the authorities. This time, for the Messenger of the Earth, who flew to a meeting of the Galactic Federation, but right during an inspired speech before the aliens saw that unknown persons were kidnapped by his native planet – she just disappeared. Now we understand, you need to deal with this problem so as not to lose your chair.

For this will have, as in the first part, actively recruit citizens to their team – only here these are residents of various planets. All of them are divided into three types. Some directly participate in fights – it can be a pilot of our starship, which is equal to a typical pirate boatswain;slightly unbalanced astronomer similar to Einstein (Albert Einstein);Robot sheriff with one of the planets;Chef intergalactic network of restaurants. Or, for example, a police station TimeCop (explicit reference to the film “Time Patrol”), which, using different space-time lines, is simultaneously in all rooms at the local police station and makes all the work immediately.

Each of them, in addition to their own combat techniques, has a unique nebaresis. For example, the sheriff robot on the go gives the assignment of murder of monsters (often on time). And astronomer helps to look for the extinct land when we go into space.

They are not free – they are partners!

Other citizens who are gained in our team are the so-called partners. They do not participate in fights, but they can be appointed by assistants (peculiar pets) combat units so that those received bonuses to characteristics. Also, partners can treat in fights or activate our beneficiaries and debapts useful to us. Such characters also have interesting abilities. Some of them execute the role of the “Options” section – for example, allow you to adjust the complexity of the battle and mini-games. Bosses in such a game, naturally, very unusual.
Partners There may be a lot: these are a variety of aliens and people – Pizza delifers, judges, cleaners, cosmetologists, composers, translators, archaeologists, couriers, chemists, decorators and so on.

Finally, as in almost any JRPG, there are characters that can be called in battle. Doctor, Hacker, Reporter, Miner – these and many others are useful each in its own way. And besides that, many still have again nebanie skills that help in the study of the world. For example, the same miner when he gets into the team of our ambassador, it opens up the opportunity to destroy the stone obstacles to collect resources, and in previously inaccessible locations.

In total, the team may have up to 40 citizens, many of which are also hammering out, developing their talents and opening new as the levels set (the latter – first of all about fighters and partners). Can imagine how much in Citizens of Space skills and abilities for all occasions and how many options for party buildings – only Troim are allowed in a fight. And all these fighters, alien or earthly “recruits”, partners, naturally, I want to collect together, just like Pokemon, without missing any, is one of the main incentives for passing.

Some become available in the plot, but most are first asking for some request. Yes, they do not differ in special diversity. But if you understand that you are not playing new Baldur’s Gate or Pillars of Eternity, And in a humorous JRPG, you will not have any special problems in order to deliver pizza, search for the necessary items or recipes, report to crimes, test the devices in battle (or use sweets with bonus effects on the needs of thick pastry), hunt for gangstersetc. Mini-games in battles are always forced to be in a t1.
Especially since they come across and very funny missions. For example, a robot translator will ask to listen to 800 lines of dialogues, an impressive curator (or curator – exactly and do not understand) avant-garde alien exhibitions, dressed in style Sergey Zvereva, Wants to find something to the extreme of arthouse or sculpture, which “would reflect the spirit of the Galaxy”. Chef need to help make a steep dish, and the composer is to finish the symphony. And for this you have to participate in mini-games.

Click on the button – you will get the result!

All local fights are also built on mini-games. Fights pass, as usual, in step-by-step mode, allowing each hero to use a standard attack or advanced skills to which, however, you still need to accumulate energy charges. Or we take a pause of the Messenger of the Earth and the leader of the whole team to use consumables or, for example, call the police – it is such a skill that reduces aggressiveness (and, accordingly, damage) in all participants in the confrontation. You can also call “Summon” – if you have enough charisma, which plays the role of the rage scale.

Everything is generally traditional for JRPG. But so that any attack or skill, which allows, for example, to regenerate energy or treat the cams, worked – and worked as efficient as possible, we must press the specified buttons on time, clamp and press them, stop the arrow running in a circle in the desired sector and so on. To defend themselves during enemy attacks, it also has something on time and quickly press – and even in the correct sequence. Sounds like banal QTE, but in dynamics everything is much more diverse and more fun.

In many ways, that is why fights in Citizens of Space do not have time to eat like in many JRPG, – each of the many “citizens” has their attacks and skills and their own mini-games for them. And if the number of random collisions will start annoying, then you can minimize their frequency. This is generally an excellent “chip”, which are simply obliged to adopt all the representatives of the genre. Want a lot of Grinda – please unscrew the setting to the maximum, you want to run the location faster – do the opposite.

Moreover, even from one battle here you can get a lot of experience, money and other awards – if you do not finish it immediately after the victory, and ask you to add a few more waves of enemies. And so do it allowed several times. Here it is – the real democracy of Paul on the beginning of the world’s best messenger in the world!

Drink me in applause

Yes, B Citizens of Space Charisma of the main character is a big power and one of the main arguments in the hands of the authors. He is a self-breather, thinks a lot about his hairstyle and in general appearance (much more than about the salvation of the Earth). But at the same time, at all, the thief, rascal, lazy and a deceiver, like a hero Citizens of Earth. A funny funny fool who is always smiling, for some reason he calls “ma’am” and relieves write to his fans, even if they see him for the first time. Russian translation there is no.
So, at first, our messenger at first accepted the fan of a child who made a heroic path through space for his idol. And then for a long time calls him a little buddy than wildly admissors. And only after a while agrees: “Okay, the normal size of a friend”. Sometimes the increased self-ability of the chief of the chief of chief dialogues Zhvanetsky: “Hello, a citizen of the judge”. – “Your Honor”. – “Oh, thanks that you appreciate me so much, but, right, not worth it …” – “I say that I need to contact me”. – “How?” – “Your Honor”. – “Well, you, that you, I really appreciate your attitude towards me, but you can not repeat it every time”. – “Oh my God…”

In general, you yourself understand, with such a hero and a crowd of various companions, against which the parrots hang out from eggs, duck-bodybuilders, dogs in cosmic spaces and walking on the legs of crescents, do not have to bored. In addition, the authors are still trying to pierce the “fourth wall” and let go of a purely gamer jokes.

Adventure time on earth and in space

Well, generally play in Citizens of Space Fun and interesting. She does not pretend to be a genius and laurels of the conqueror of our hearts. But the authors know their own business. There is everything that such games love, including the study of locations, riddles, shopping, eating different dishes for bonuses, collecting resources, selection of the best equipment or its kraft from a variety of ingredients.

There is everything – and even more. After all, in addition to research, dialogues, quests and battles, we also have any space. You can fly on your starship, search for the plot of land or just open up new planets (many and climate, and the composition of the population vary) and disembark on them. And there suddenly it turns out that this is a kind of golf course, where we will meet the archaeologist, ready to join us, if we gather all parts of the treasure card. However, for landing on some planets, we first need to get new talents and a more powerful ship.

The number of mini-games in fights is really impressive.
***
Citizens of Space not particularly known, not advertised, does not differ in bright appearance. Yes, and move the character on the map is not too convenient – a vivid example of “tank” control. But I still recommend the game to all the fans of the genre – there is enough fun, diverse, many adventures, quests and unusual characters with unique skills. Plus a completely religious protagonist. And what else needs to be fascinating to pass a couple of evenings? Although they are most likely not enough – too much in everything in Citizens of Space.

Pros: interesting story;Fascinating gameplay;Mass available to hire characters with their abilities;very charismatic main character;a lot of humor and funny mini-games;battles are not allowed to bother;You can adjust the level of the Grinda;Pleasant music and expressive voicing (the main character was especially successful).

Minuses: Graphics may seem too simple;Not the most convenient character management.