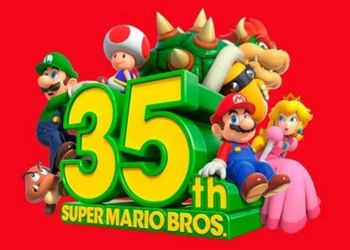 The celebration of the 35th anniversary of Mario continues – two weeks after the release of the commendable collection Super Mario 3D All-Stars Nintendo Switch came out Super Mario Bros. 35. This is the royal battle for the first universe Super Mario Bros. – 35 players compete with each other, passing classic levels. The idea is excellent, and it is better implemented than in the free and now closed Mario Royale (new product development, by the way, began before the appearance of the fan game). But if compared Super Mario Bros. 35 with a similar one Tetris 99, then the second seems to be slightly more exciting.

Comparison S Tetris 99 More than appropriate – the engine is the same, the developers are the same, and the interfaces are similar. Like the original, this version of the famous platformer is reproduced in 4: 3 format, only here on the sides you can see 34 small screen. In them, other participants of the match are trying to survive and drop out when someone “kills them” or they themselves die after falling into the abyss or unsuccessful jump in the crowd Gumb.

The game was transferred all levels from Super Mario Bros., Leaving all blocks, secrets and opponents on the spot. Unlike the collection of 3D games about Mario, here the emulation is not used – the game literally collected anew. Therefore, the plumber is managed a little differently than before, the muscular memory will fail, if you try to play the same way as in the original. But it will be quite simple to get used to it, and the veterans of the series will have an explicit advantage, since the location of all mushrooms and hidden blocks they know by heart. 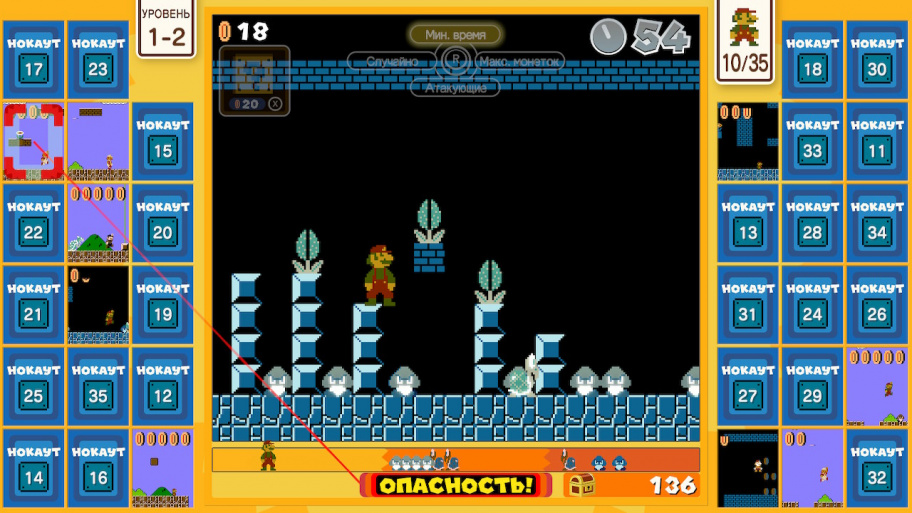 The situation is not the most pleasant.
On the other hand, run bullets all levels they will not be able – since this is a royal battle, then there must be any ways to spoil the life of rivals. And they are here. Every enemy killed, whether Humba, Kupa-corpse, chip chip or even a Bower, immediately after death goes to the world of another user. He is paler than the rest of the enemies, but the danger represents exactly the same same and may appear in the most unexpected place – even on the edge of the platform, to which the player should jump to move on. Already after a few minutes of such ghosts, it becomes much more than ordinary opponents.

However, they are not so difficult to eliminate them, because bonus items are not going anywhere. Mushroom still increases Mario in size and gives him an additional “life”, and the flower allows you to shoot fire balls that kill everyone who they will run. Because of this, there are problems with the balance – no one forbids the flower to use, and there are no fines for it (or rather, one is, but about it is slightly lower), so it’s stupid to refuse him and run “naked”. As a result, at least one gumbe we meet, at least fifteen immediately – there is no difference. 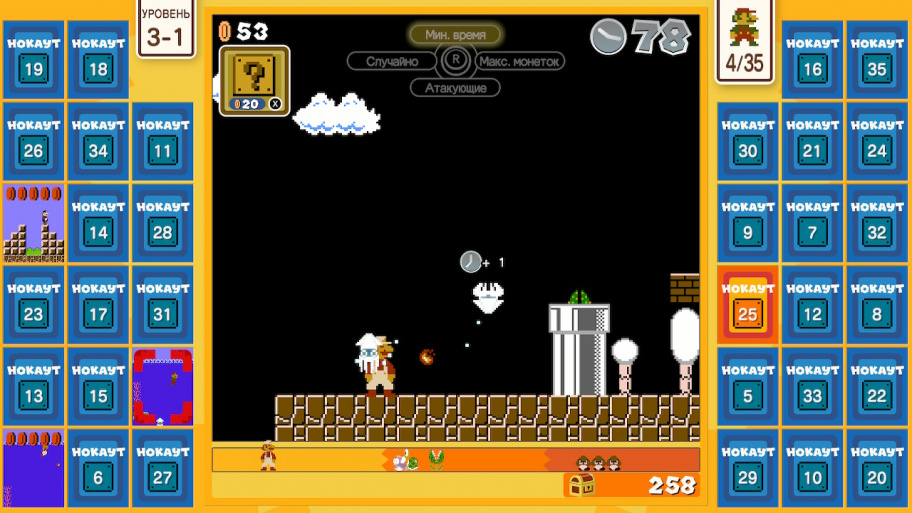 Underwater enemies should not be here, but their ghosts may appear everywhere.
The only thing that should make fire mario is less attractive is a reduced bonus for killing an opponent shooting. As in the classic platformer, the player here has a timer, and the meter grows every time you eliminate the monster in any way. If this was done with the help of a ball, add only one second, and two or even three will give on top. If you have to jump from one enemy to another, without touching the earth, the bonus will be even more.

It is only possible to increase the time by other methods: for re-capturing a flower will give about 15 seconds, and for the jump on the top check box at the end of the level – another 15. So you don’t even remember about the timer in most cases, and this is including fairly for the final part of the match, when only five participants remain and music is accelerating. Time begins to melt faster, but still not enough quickly to accounter in a rush to jump on all the consecutive monsters.

Even for two killed in a row, creatures give a small bonus.

As a result, in the final, you do not die because of the fact that the test timer or the enemy sent too many enemies. Often lose due to falling into the abyss or unsuccessful jump, and this does not depend on the actions of opponents. So call Super Mario Bros. 35 the royal battle is not entirely correct. In the same Tetris 99 Matches are much more intense – when rivals throw you with additional horizontal lines, and you fight off from them with the help of successful sticks, pleasure get much more. There is no feeling that you somehow affect the game of opponents, because the matches seem slightly tightened.

Saves the gameplay – Super Mario Bros. that a few dozen years ago that today is played equally nice. No wonder this platformer became legendary. The novelty does not suit those who love to carefully jump on the platforms, collect coins and break each block, – first of all it will have to do those who like to kill monsters, jumping on their heads. It is always nice when you jump on a coupper, and then to his shell, so that he swept aside and hit three gumb. And here Gumba can be more than a dozen, and the sensations are particularly cool, when there is also time for such a combo.

Coins are also useful – when the player collects 20 coins, he can take part in a simple lottery and get one of four prizes: mushroom, flower, star (Mario becomes invulnerable and kills enemies with one touch) and a POW-block, eliminating all opponents on the screen. Plus coins are transferred to a personal bank – before the next match you can choose, with what bonus to start it. Obviously, between the mushroom, the flower and the star choose a flower, and money gives too much to have saved.

the main problem Super Mario Bros. 35 related to the fact that the cards for which the player gets through the first few hours, very little. Level 1-1, of course, is beautiful, but after 30 occasions even begins to bother. On 1-2, you can run at the top of the card to three pipes leading to random levels, but there often see the cards from the first world. Later stages, apparently, unlock randomly – just the game suddenly want to throw you into some 3-1.

The more levels are unlocked, the higher the chance to see something except the first world here.

Open levels become available in the match menu menu, but when they choose the trip you are not at all – they are probably just entered into the pool of possible cards within a specific race. The farther, the more dangerous enemies are the Hummer-bro, much more dangerous to ordinary gumb, and if in the original Super Mario Bros. They are trying to avoid them, then they will definitely kill them to send one of the opponents. The same thing with a bowser is better not to jump over it, but throwing fiery balls. Perhaps a few days later, when many users unlock at least half of the levels, the game will become chaotic and harder – it is difficult to do forecasts, because at least this mechanic does not explain here. At first, many generally thought that the strength of the sent enemies depends on the number of coins, but it is little like the truth.

Well, one more disadvantage can be considered that after March 31, the game will not be available. If in the case of Super Mario 3D All-Stars it can still be somehow explained (although this is an absurd solution), then the reasons are incomprehensible. But here and the statistics are maintained, and there is a record table (or rather, the pyramid of records) with more coins, and the progress system is available – for achieving new levels you will unlock random badges for the profile. Spend a lot of time on a multiplayer game that will disappear later a few months, somehow I do not want – suddenly he will hide himself, and then grieving. 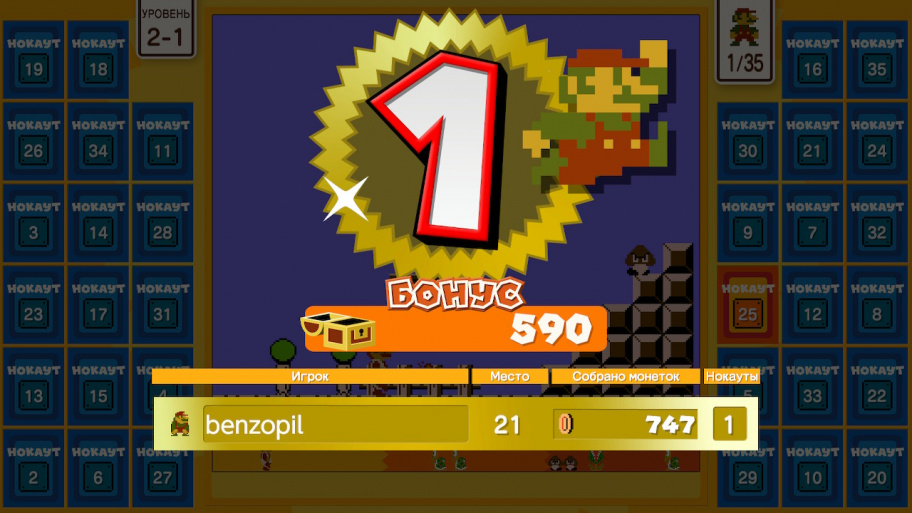 If you do not fall into the abyss and do not make stupid mistakes, the victory will not make himself wait.***
But this does not cancel the fact that Super Mario Bros. 35 – A good attempt to implement the Royal Battle of Mario. She is not so exciting as Tetris 99, – Attacks of other participants and emerging because of this danger there are better implemented. But this game once again reminds how beautiful the original still remains Super Mario Bros. In addition, the novelty is free for Subscribers Nintendo Switch Online. Perhaps patches, developers will correct the balance and improve the rotation of the cards – then everything will become much better. But whether they will spend time on the game, which will disappear after six months?

Pros: funny idea and good implementation;All levels from the original Super Mario Bros. transferred in primeval form;Remaining gameplay;”Fight” with a bunch of opponents is quite fun, especially if you use shells;The game is free for online service followers.

Minuses: The influence on other people’s worlds is not much noticeable, even when monsters kill crowds;controversial balance;For too long has to play on the same levels;The game will disappear six months later.