Twitch removed the emoticon with a hard amogus, because he looked in it “sexual character”

Blogger DeadP47 said that Twitch blocked his smiley, where the character from Among us Rhythmically moves ass. The administration of the service deployed in the image of indecent subtext:

Cause: Invalid content – sexual images or nudity. That is, the emoticons in the style of GASM, which contain an image of a sexyized torso or biological fluids.

In fact, the result is expected: in July, the same fate has suffered almost a similar emoticon from the Karacorvus streamer, only there swresk the crow.

Recall, Twitch removes emoticons and for other reasons. For example, one of the most popular, PogChamp, was demolished due to the fact that his author allegedly supported the assault capitol at the beginning of the year. 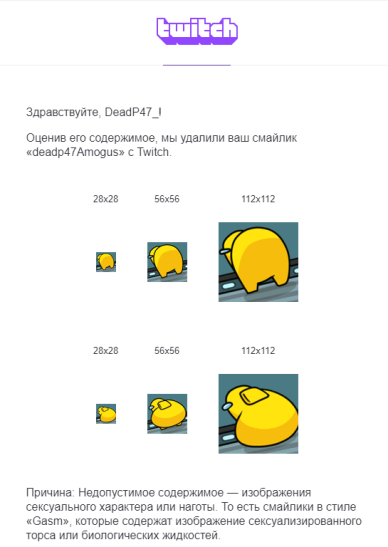 Hands on the table!