Hangman’s keys in Doom Eternal open a special Gate, beyond which you will find much more trouble than usual. These are optional skirmishes that are on about half of the story levels. Think of them as a test or an exam on what you managed to study in the game. Each skirmish behind the Hangman’s Gate consists of waves of constantly appearing opponents, while all spent ammunition and additional lives, even if you die, will be lost forever.

But the risk is justified, as the developers have prepared special awards for you. For each successful battle for the Hangman’s Gate, you will receive one heavenly key. Having collected all the keys, you will receive a special prize. Yes, this is a secret weapon, but no, I will not tell you which one, so as not to spoil the surprise.

Before you begin any challenge beyond the Executioner’s Gate, you will need to access it. In addition to the need to find the Gates themselves at the location, you will also need to find a key nearby that unlocks them (do not confuse with the heavenly one, which is issued as a reward). Fortunately, the key is somewhere near the Gate. However, the search will not always be easy. Below we tell where to look for all the keys and the Gate of the Executioner!

Toward the end of the level, you will have to move through a segment with falling platforms soaring above the fiery lava. When you do this, at the end you will find a platform for jumping. Use it to fly up. Look to the right side and on a small ledge, you will find the executioner’s gates shining with purple light.

Stand at the Executioner’s Gate. If you stand with their backs, then go to the right side. This path will lead you to a spacious cave, inside which there are multi-level ledges. Kill the imps located on them, then climb onto the upper ledge. To advance further you need to jump into the hole on one side, but in order to find the key, you will have to jump into the hole on the opposite side. Over the entrance through which you got here. After doing this, look down outside the cave to find a platform with a purple key. Pick it up and boldly open the Executioner’s Gate! 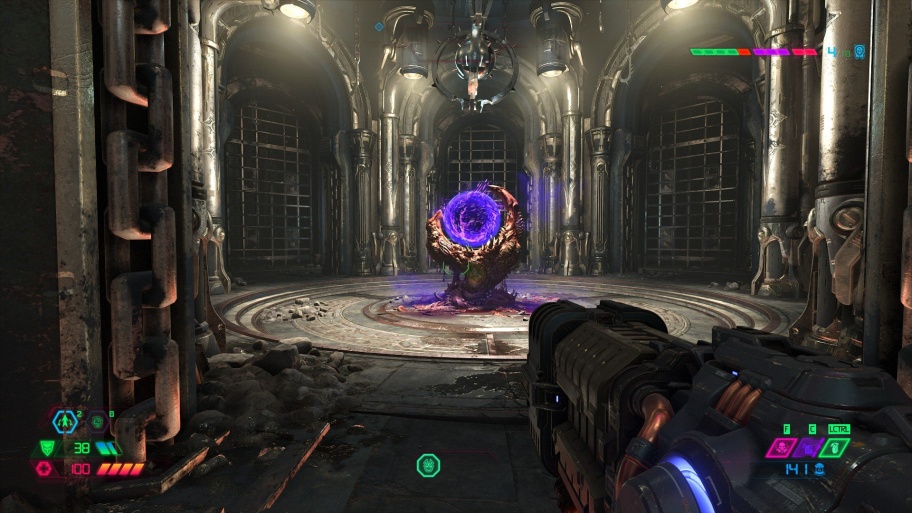 The executioner’s gates can be found during the passage of the task “Penetrate into the base of sectarians.” Finding a key for them is one of the most difficult tasks since its location is not obvious. As soon as you get the sectarian’s key and get to the statue that you want to knock over, do not rush. Go to the statue on the side and jump on the wall. Then fall down, under the statue, and jerkily get to the yellow bars. From them fly forward to another wall, then – to the right to the booster and the far wall. Going upstairs, you will find the executioner’s key.

Another difficult point, because in order to get the key to the Executioner’s Gate, you will need to go through almost the entire story level, which includes the search for yellow, red and blue keys. On the other hand, there is no problem getting to the Executioner’s Gate itself. But the key cannot be found until you have a blue bloody key. Go through the task until you find it, and then return to one of the two central areas and apply the blue key to the energy barrier in the center of the structure to access the blue jump panel. Jump on the panel and fly to the wall on the building opposite. Walk along the corridor inside the building to find the key. Jump from here, go along the pipe and find the very Gate.

Compared to previous tasks, this is the easiest. Once you find the Hangman’s Gate on the top floor of the building, turn around and look into the hall left behind. Jump with a jerk to the wall on the right. Climb it, and then jump to the opposite part of the hall to find the key at the same level.

You can get to the Executioner’s Gate during the “Get to the Portal” task, where you need to use an ion cannon to get to the rescue capsule. The key will be visible behind bars, but getting to it is not easy. To the left of the key is a window labeled Operations. Go there to find a control panel that you can interact with. Do it. The wall will move away, and a small platform will rise from under the floor. Use it to get to the ventilation grille with a crack on the right (a similar grille on the left leads to the collection album). After breaking it, follow the key.

The executioner’s gates, which you will find during the Crucible Recovery mission, open quite simply. But first, you need to solve the puzzle with water. The key and the gates are close to each other, but to get to the subject, you need to get rid of the radioactive pool. Walk past the Executioner’s Gate until you find yourself in a flooded room where there is a stone block at the bottom.

Pick up an insulating suit and dive into the water to find a wall with a green crack. Accelerate and brake it, so part of the water will go away. Swim into the passage below, into the side corridor, and rise from the water to the surface. There will be a charge for an insulating suit, and there is a green dot on the opposite wall. Shoot it to raise the grate underwater in the same corridor. Swim into a niche and smash another wall with a green crack. When you do this, the water will completely disappear. Now hit the green block, and then use it to jump onto a small wall for a hook. Having risen on the ledge, turn around and shoot at the green dot on the other side. The way will open further. Do not rush to leave the corridors, moving along the marker, but instead, right before the exit, turn onto the stairs to the left. She will lead you to the key to the Executioner’s Gate.

When you get all six heavenly keys, having passed the tests for the Hangman’s Gate, you can unlock the most powerful weapon in the game. To do this, visit the Guardian Stronghold and find the energy barrier that can be unlocked by inserting six keys. After that, interact with the secret weapon.