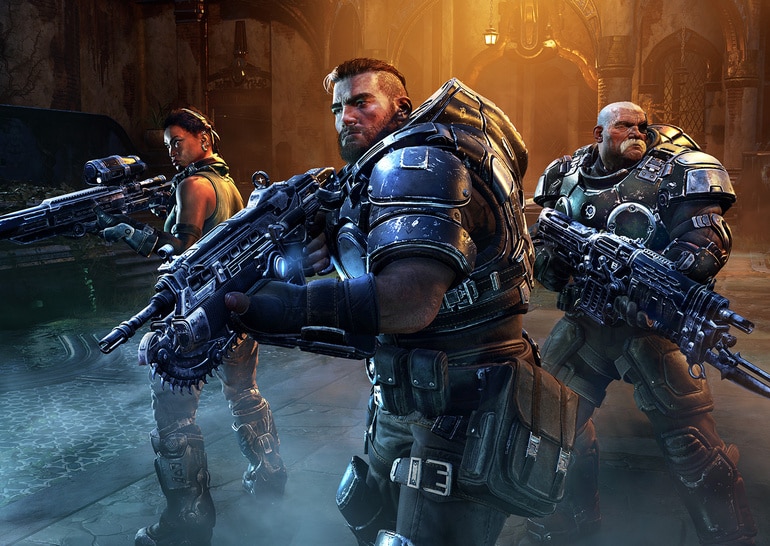 In the final review of the Gears 5 shooter, we expressed concern that the tactical version of Gears, Gears Tactics, would not be very comfortable in the tight framework of the turn-based strategy genre. Well, take our words back: Splash Damage and The Coalition, who have no experience in creating turn-based games, managed on the first attempt to make almost the best tactics of recent years. Learn Firaxis!

Gears Tactics doesn’t look like a satellite game and cheap addition to the main series. It feels like a full-fledged part of the franchise, revealing and complementing the plot of Gears 4 and Gears 5. Like the last parts of the main series, the tactical strategy is made on the Unreal Engine 4 engine, and, it seems, even using models and textures from older games. Choosing UE4 for a tactical game with a 3/4 view made it possible to kill two birds with one stone: firstly, to make chic videos on the engine that are no worse than those from the same Gears 4 or Gears 5; secondly, to immediately achieve the best in the genre of graphics, which will be very difficult for competitors to kill. 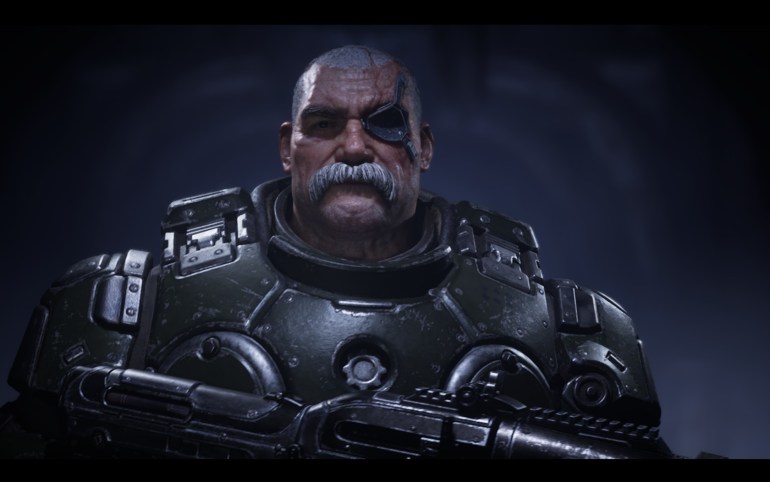 The plot of Gears Tactics also does not seem rudimentary and far-fetched, the story of Gabriel “Gabe” Diaz, Queen Roy’s husband Reina Torrez, and father of the main character of Gears 5 Kate Diaz, is important for the Gears of War universe. Especially since Gears Tactics shows events immediately after the first strike of the Dawn Hammer at the beginning of the Locust War. Gabe Diaz, a former lieutenant colonel demoted to sergeant, is ordered by Coalition Chairman Richard Prescott to locate and destroy Ukkon, one of the leading locust scientists. Actually, during this suicidal mission, Diaz met his future wife. Just some “How I Met Your Mother” in the format of a tactical strategy. But in order to compete with Ukkon, Diaz first needs to collect from the remnants of disparate military units and civilians that joined them something similar to a combat-ready unit.

As you can see from the previous paragraph, Gears Tactics is a story game, that is, you will not see such freedom as in XCOM / XCOM 2. The campaign consists of three acts of 6-8 operations each, plus inside some chapters, there are three bonus operations, two of which can be performed to replenish your squad with new recruits, pump characters, and receive rare ammunition. However, Gears Tactics is still the longest of Gears, it will take you at least 20 hours to complete the campaign, compared to 10 hours for Gears 5, for example. Not too much to not get bored, but not too little – just a very regular, balanced duration. But with replay ability here is so-so. You can, of course, re-run the campaign at a high level of difficulty, but this is unlikely to be as interesting as the first time.

Unlike most turn-based tactical strategies, the field in Gears Tactics is not divided into hexes or squares. Your soldiers move in a free manner to the range specified by their characteristics and ammunition and, if necessary, “stick” to the shelters, as befits the Gears of War. And by the way, here, in Gears Tactics, the shelters look much more logical and justified than in all the rest of the series. Available to you fighters, both story characters and rank-and-file joined the squad, are divided into different classes, each of which has a wide two-sided tree of skills that are pumped with a set of levels. Conventionally, one of the branches of the tree is personal skills, the second is team skills, and here it is difficult to say which is more important. 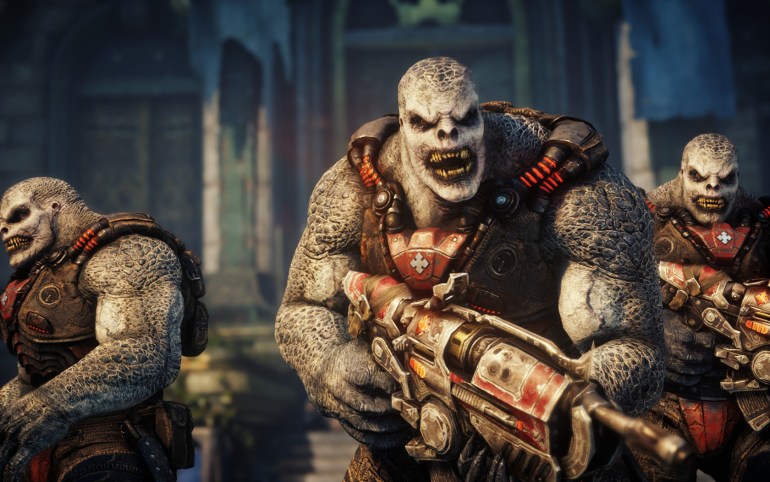 Each of the classes has its own pros and cons, but, by and large, for each of the missions you can take an arbitrary composition of fighters, because each Gears, as you know, is a self-sufficient combat unit, in addition, even medics here can be armed not with healing, but with military grenades. Some classes of fighters have skills that allow them to get additional action points when killing or executing opponents, while other classes can “reward” their comrades with such points. Plus, rare, epic and legendary (yes, almost like in a role-playing game) ammunition items allow you to get bonus action points under certain conditions. As a result, having correctly built the sequence of moves, and you can spend points at least one for each character in any order, you can get a very long chain of movements/actions, literally thinning out the ranks of opponents. Yes, as in the recent XCOM: Chimera Squad, you can take up to four fighters into battle.

We recommend trying characters of all classes, each of them has interesting and killer skills. Scouts can become invisible and avoid enemies from the flanks so that later they can launch a powerful attack from behind. Snipers, when handled correctly, can literally mow down very strong opponents (hello to the useless snipers from Gears 5). Vanguard fighters rush into a bayonet attack, covering a huge distance and destroying most opponents with one blow. Support fighters are very good with the Lancer saws. Etc. There really are tons of tactical finds that are interesting to combine. Yes, and do not forget about the Watch mode, in Gears Tactics it is incredibly useful and allows you to destroy half of the opponents during their course. However, enemies also like to use the Watch and Suppression, so be careful and do not substitute. Remember, almost all classes have special skills to interrupt someone else’s Watch. Despite the sufficient number of missions, by the way, keep in mind that each of the soldiers of the squad can “go” to secondary tasks only once per chapter, pumping heroes is extremely slow, so you probably won’t open all the skills. It’s a pity. 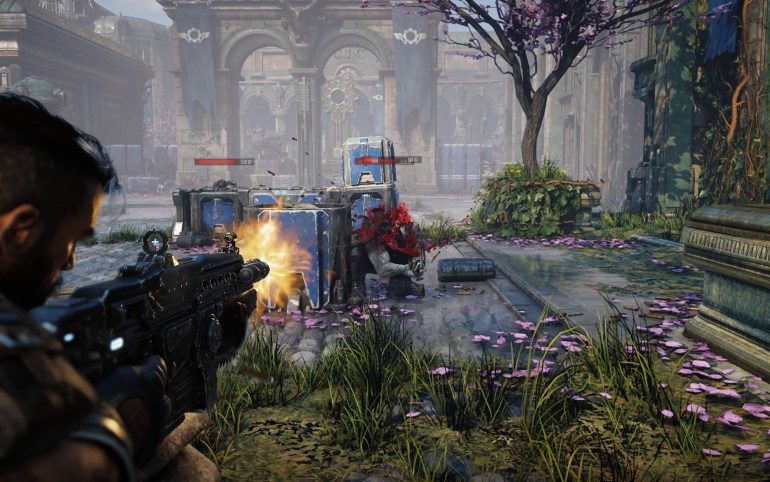 Gears Tactics also has other not-so-obvious, but interesting tricks. So, the heavy weapons of some opponents can be picked up and used until the ammunition runs out. Enemies can be dropped by the shock wave back into the pits from which they climb out. Grenades will ricochet perfectly from sloping surfaces, this can be used to significantly increase the throwing range. Wounded opponents die in a few moves to get bonus movement points, do not forget to finish them off. The accuracy in the Watch, as a rule, is higher than in normal mode. Pistols shoot more accurately than heavy weapons, etc.

This is not to say that the missions in the game are very diverse, but this is a problem for all tactical strategies. Storylines are a little more interesting, usually consist of several parts, side ones are simpler: as a rule, to hold certain points or save prisoners for a limited time. The timer is quite soft everywhere, except for missile bombardment missions, where you have to run as hard as you can, ahead of the moving firing zone. At the end of each act, a battle with the boss awaits you, as, in my opinion, somewhat protracted. The final opponents in them are very thick and you need to “disassemble” them in parts. 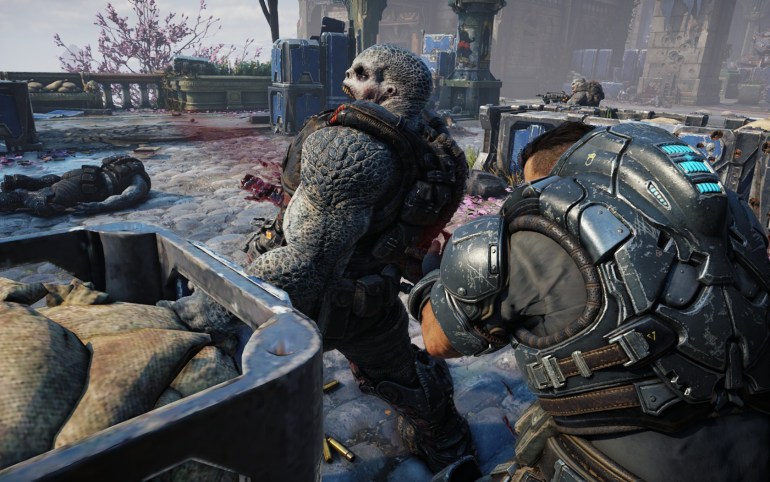 Despite the fact that Gears Tactics is still a turn-based game with a top view, the battles here look very impressive and absolutely in the spirit of Gears of War – extremely brutal and bloody. Your fighters famously shredded Locusts with saws and pierced with bayonets, grenades left a cloud of bloody debris from the enemies, a line from a heavy machine gun rips the enemy in half, etc. Animation of deaths, shooting, the use of skills – everything looks very savory and bright, quite unusual for a tactical strategy.

Yes, and here you can paint literally every part of the armor and weapons, almost like in some Warhammer 40K, only better. In addition to the color, primary and secondary, you can choose the material and background pattern of each item, more than enough options, and the final appearance differs very dramatically. A trifle, but nice. 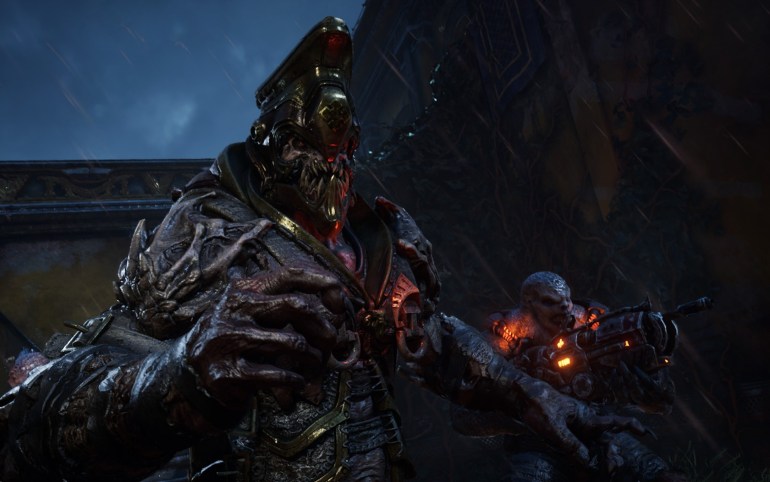 By and large, the linearity of the campaign is almost the only serious drawback of Gears Tactics. Well and still the cost, traditionally rather big for Microsoft games (Steam is cheaper). However, if you have a subscription to the Xbox Game Pass for PC, you can try the game for quite reasonable money. While Gears Tactics has only been released on PC, a release on Xbox One is planned, but its exact date is still unknown. An amazing thing, the almost full-fledged Gears of War is a temporary PC exclusive. We live in strange times!

Splash Damage and The Coalition turned out to be a surprisingly complete and well-built game. Gears Tactics is definitely one of the best tactical strategies of recent times. If you love the games of this genre, it is definitely worth getting to know it, even if this is your first time hearing about the Gears of War universe.

P.S. Please note that, like other Microsoft games, Gears Tactics needs an Xbox Live account, which, however, is easy to create if necessary.

GOOD: Full compliance with the style and spirit of the world of Gears of War; brutality and bloodiness; the plot complements the story of Gears 5; transfer to a turn-based strategy of receptions from original shooters; interesting tactical tasks and skills of heroes; The best in the genre of graphics; balanced duration
BAD: The campaign in the game is essentially linear; low replay value; cost
CONCLUSION: One of the best tactical strategies of 2020 and a great addition to the Gears of War series