New World was announced in 2016 by Amazon Game Studios along with two other games: Breakaway and Crucible. Of these, only New World survived to release. It’s a massive online role-playing game set in the colonization of America (there are conquistadors, instead of Indians, there are zombies), where players can develop settlements, kill each other and monsters.

On the day of the game’s launch, people flooded the servers and… stood in queues of 12 thousand people, if not more. Developers did not expect such interest, in an expedited manner opened new servers, and more, and more. Somehow managed to cope with the influx of people in only a few days.

New World is now played by hundreds of thousands of people on Steam. It is one of the most popular games in this service, and the reason for the success is obvious: gathering, crafting, and PvP. That’s what you have to do non-stop in New World. Well, and running. A lot of running. The transportation system here is horrible: there are not a lot of teleports, the world is big, there are no horses. But first things first.

The coin is the main currency of the New World. To gain a competitive advantage in the game, you need New World coins and lots of them. You can earn New World Coins for quests, expeditions, wars, invasions, and other actions. However, especially for newcomers, it takes a very long time to get enough New World coins. You can buy New World Coins at MmoGah.com. The sources of our products are always legal and sold to customers at a low price. Meanwhile, we also promise fast delivery and guaranteed security. If you have any problems, contact our support team 24/7.

The initial stage of the game

In the beginning, you are given to choose the body and the appearance of the protagonist. After that, the ship, in which we are sailing into the new world, goes down. All other crew members turn into zombies, and the captain becomes a red monster.

When this nightmare ends, you find yourself on an amazing island. Traces of an ancient civilization can be seen everywhere. The coast is one big graveyard of ships. And you think to yourself: “There are extraordinary adventures waiting for me here!”. 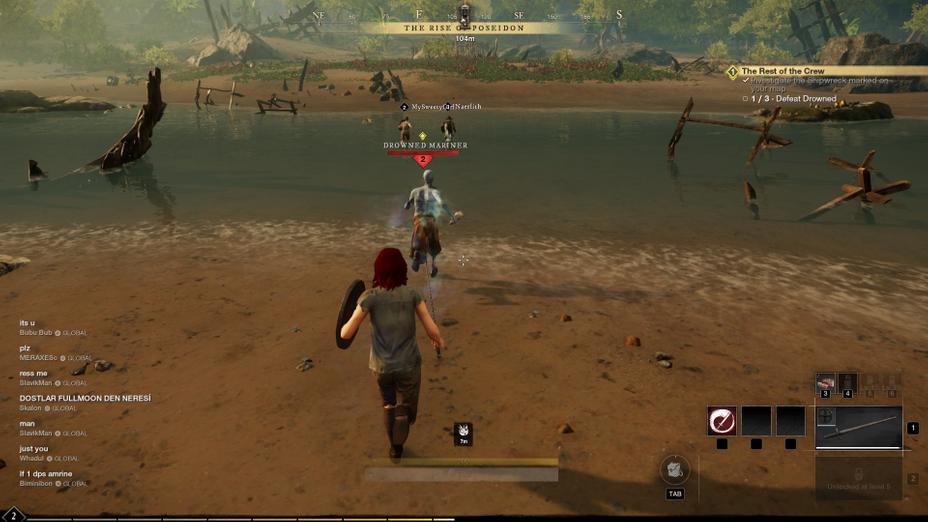 But this feeling is deceptive. It disappears the moment you are given your first quest: to kill a group of zombies and search the crates. And then do it again. And again.

You have to repeat these actions until you reach level 25, which takes 20+ hours of time. Also, the game has a nasty habit of sending you to already explored locations. And to get there you have to walk. Through monotonous forests, colliding with annoying wolves. The road itself takes up to 10 minutes! And if your goal is the boss, you can easily run into a dozen players, waiting for him at the place of revival. You have to stand in line!

Once you reach level 10 you are forced to join one of the factions: Syndicate, Marauders, or Covenant. In theory, they have different ideologies. But in fact, the only difference is the color of the icon above your head. For their quests (including PvP-missions) charged a special currency, and for it, you can buy unique equipment. That’s all the basis for the faction war.

The situation is not saved and filing tasks. They are not accompanied by cinematics, special events, or emotions. The player is simply bombarded with a flood of identical information. At first, you carefully read the messages, but then the dialogues are simply skipped. All of these factors hit the perception hard. The player begins to boredomously observe the slowly increasing level.

Eventually, the player is bound to encounter the main storyline (after many hours of walking). After that, you will unlock the spoil mechanics. Portals to the underworld and hellish creatures will begin to appear everywhere. The usual zombies will recede into the background. Now there is a real threat to the world, except… closing portals gets tiresome, and as a reward, you get a loot box. Literally. With random and often useless content.

When you reach level 25 you will open high-level locations. They are much more dangerous. New types of enemies will appear. Old ones will get new weapons and abilities. They will attack more frequently and use different tactics. But the approach will not change.

In New World, there is no system of the initial choice of class. All players begin with the same characteristics and improve them to their liking. Their further development depends on how often you use a particular weapon. The more often you hit your favorite iron on the enemy, the more passive and active skills you get. At first, you can choose them as you like, there are no restrictions on redistribution. 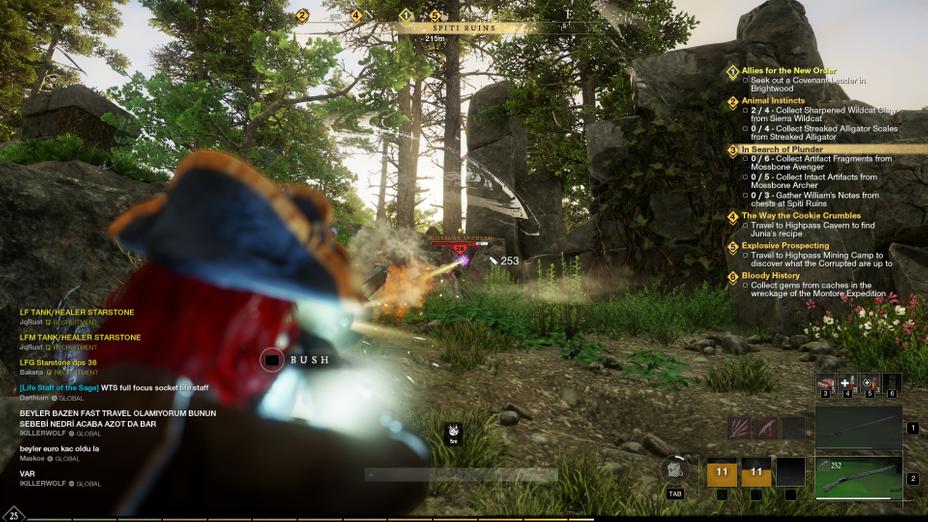 The combination of two weapons is responsible for the character’s specialization. You can use the hammer and sword, betting on close combat. Or rapier and musket if you prefer a maneuverable character. You can make a hybrid of a mage and a medic.

But that’s not all! When mining resources, certain skills are also pumped up: when you cut down trees or mine stones, gather herbs, or catch fish. Leveling up affects the quality of the resources you can mine, and also shows their location on the compass.

The mined resources are processed. The obtained materials are used to create anything, like armor and weapons, which can then be painted or enchanted. We create potions and cook food, make ammunition and amulets. All of this can either be used yourself or sold at auction. Trading between people is an important aspect of the game because it can earn a lot of gold. Side quests pay pennies for completing them.

But be prepared for the fact that as you travel around the world, you will, as before, have to tirelessly swing an axe and pickaxe, collect herbs, and cut off the skins of animals killed in the course. If gathering and crafting and analyzing prices at the auction are not for you, then New World is not for you. This is the main pastime here.

All preparations lead up to this moment – when a group of players gathers under one flag for joint action. Sort of like an expedition. This is when a group of five people sweeps a dungeon. In the process, they destroy the local inhabitants and solve simple riddles.

The hardest part of the process is finding people. You have to sit around the entrance for a long time, typing out your desire to get in. The situation is complicated by the awkward chat and the system of adding players to the group (you have to type the nickname of the player you want to add, in a special menu). 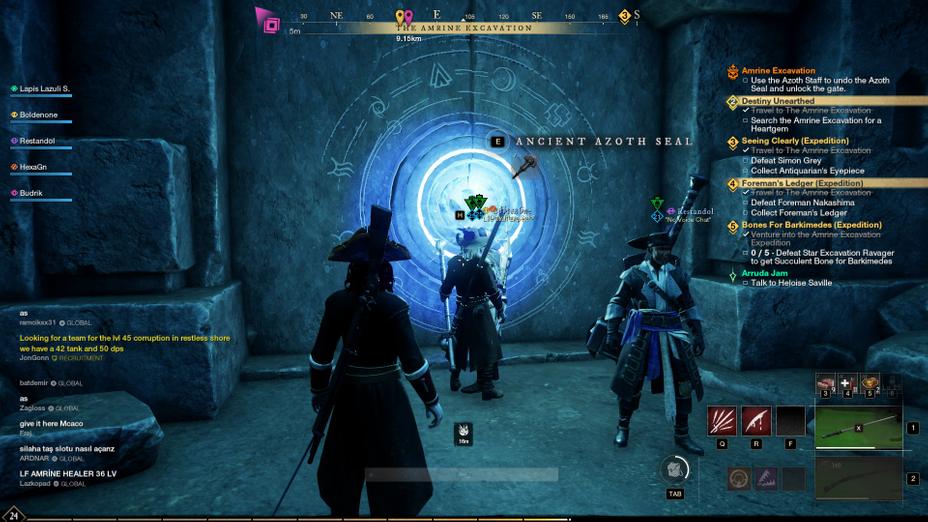 The game really opens up during global events like the faction war, when a hundred men (50 on each side) fight for control of a territory. During the war, the attackers attack the fort. They must capture three flags outside and one inside to win. The defenders, on the other hand, prevent them from doing so. In doing so, both sides of the walls are allowed to fire siege weapons. In essence, it’s a meat grinder with capture the flag. Winners will gain control of the territory, giving them nice passive bonuses. Well, and a reward for participation.

Alas, there is a serious problem here. The event involves 100 people. The server can be up to 2500 people online. This means that most of the population does not get access to the most interesting content. Especially if they avoid the social life and do not belong to a guild. In that case, their chance to participate tends to zero. They have only to arrange PvP (hunting other players) in small groups. To participate in PvP, it must be turned on before leaving the city/sanctuary. But this is a dubious pleasure, given the low reward for victory and the prospect of being attacked at any moment by high-level players.

Then there are the invasions. This is when the forces of spoil gain enough mass to storm a city. A group of 50 men gets in the way of the hordes of darkness. They must fight off waves of attackers, defending the city. If they succeed, their reward will be great. Otherwise, the processing and resource production equipment will lose a level. And no one wants that.

But even this pleasure is not available to everyone. To be able to participate in the event, the player must be at least level 50. Even if it occurs at the initial location.

The game has a lot of problems. And they began on the day of release when people were waiting for hours for the only opportunity to play in New World. In the game itself, there were problems with players who abused some of the mechanics of the game. Such as bots, which are constantly catching fish had a negative impact on the economy. Or throwing in complaints from players of a warring faction to get rid of them before the war started. And we can not forget about the cheating with the transfer of the character to the servers of other regions. Because of this, people are still standing in queues on the first servers turned on. Because of the long and tedious pumping start, a new character on a new server well do not want to.

And, of course, the bugs. Passing through textures. Invisible barriers. The super-fast recovery of monsters on the location, then they disappear at all. And those annoying white stripes that affect visibility in battle. The in-game store still (an important clarification) sells only cosmetic items. But Amazon is already thinking about introducing boosters.

New World is a game for the elite. For those who are ready to spend hundreds of hours of their life leveling up to become a part of a successful guild and take part in global events. But the game is completely unsuitable for those who just want to have fun exploring the world. At first, it is fun, but then you just get bogged down in the routine of the same-type and repetitive tasks, chopping wood and chopping stone, so that you can spend a long time waiting at the entrance to the dungeon and hoping that you will be included in the group.

The good thing is:

The bad thing is: