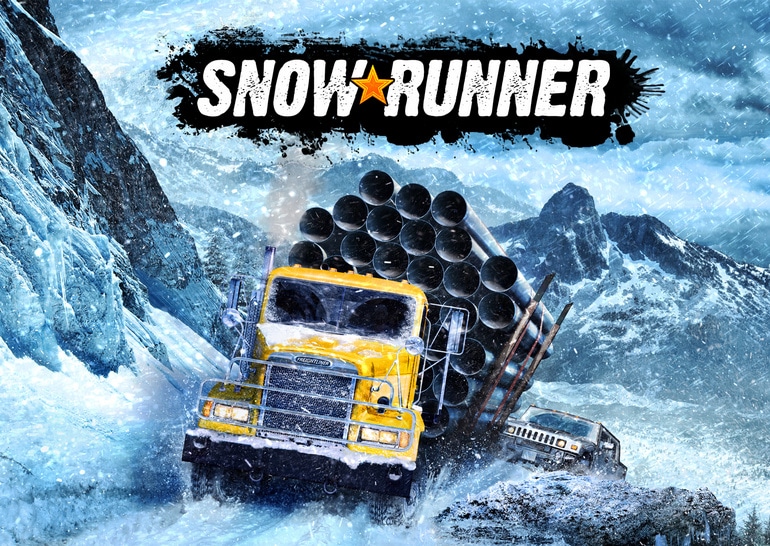 SnowRunner – a sequel (or a prequel, that’s how to count) a Spintires / MudRunner off-road cargo transportation simulator. It’s like Euro Truck Simulator 2 / American Truck Simulator, only in the most adverse conditions. No autobahns and highways, only snow, a swamp, and fifty shades of mud.

But before we go directly to SnowRunner, let’s figure out who in this series of who games. The original demo version of Spintires was developed in 2008 by a Russian with the Ukrainian name Zagrebelny for the Intel Havok Physics Innovation Contest. The project was so liked by the public that the author decided to make a full-fledged game on the basis of a competitive demo and, together with the British company Oovee Game Studios, went to Kickstarter. On June 13, 2013, the game was successfully funded and raised £ 60,935 instead of the £ 40,000 requested. Exactly a year later, Spintires appeared on Steam and received rave reviews from users. And then Pavel Zagrebelny quarreled with the Oovee Game and support for the game ceased. 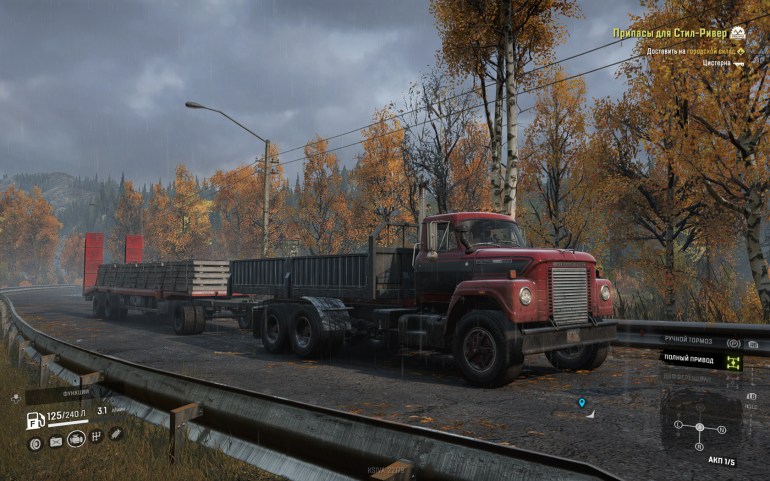 However, quite quickly the author of the original idea found new partners – the St. Petersburg studio Saber Interactive (Will Rock, TimeShift, and other games) and new publishers, the French Focus Home Interactive. So there was an updated and improved version of the game – Spintires: MudRunner, which was released on Steam in late 2017. In 2019, the word Spintires was removed from the name, because Oovee Game Studios decided to renew support for the original Spintires, the name of which, on the contrary, added the phrase The Original Game. At the same time as PC, MudRunner appeared on the PlayStation 4 and Xbox One, and in 2018 – on the Nintendo Switch. In 2018, several free maps and a large paid expansion of American Wilds with American cars and two sandbox cards came out for the game.

The original Spintires has also been updated. At the end of 2019, one free and two paid DLCs came to the game, and one based on Chernobyl. However, users greeted these updates coolly, over the past 5 years, the modder community has managed to make their own, more interesting maps.

And now, finally, we got to SnowRunner. Unlike MudRunner, this is a completely new game, on an updated engine, with several times larger maps, a more logical and lively world, interesting and varied tasks, and a very good assortment of SUVs, trucks, tractors and all-terrain vehicles. SnowRunner is developing the same Saber Interactive, which has managed to change its owner over time: in February 2020, the studio was bought by the Swedish Embracer Group, formerly known as THQ Nordic, and even earlier as Nordic Games. In addition to citizenship, the game has changed and the store, on the PC SnowRunner released exclusively in the Epic Games Store. Anticipating the indignation of some users, I would like to note that in EGS SnowRunner it costs only a little more than the already outdated MudRunner on Steam, while offering much more. So what’s new at SnowRunner? 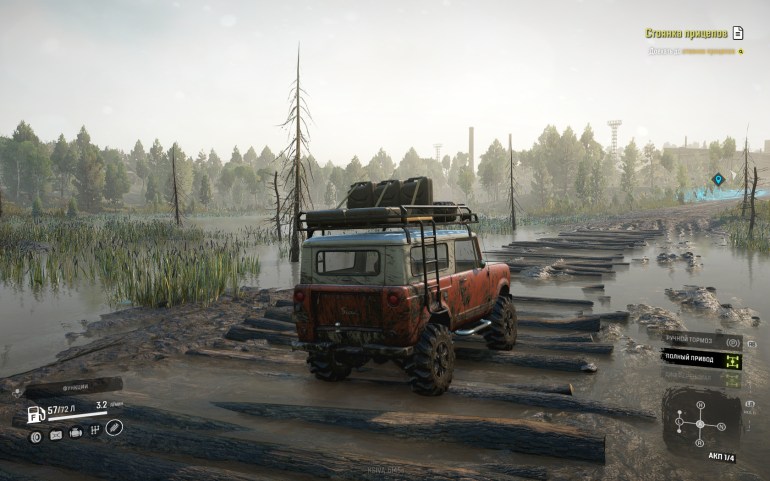 The main gameplay of SnowRunner has remained the same. We all also make our way along the “routes” of varying degrees of gouging, force river spills, flounder in the mud, glide on wet slopes, drown in the snow, actively use the winch, pull the gear lever and try to get at least a meter closer to our target, which is often very and very difficult. SnowRunner has become a little easier than Spintires and MudRunner, now you can evacuate to your garage at any time and try to go through the insidious area again, plus night rewind in single player is now available all the time. And in general, the game has become more friendly, you are not immediately thrown into the dirt, plus management has become a little easier and generally more logical.

Unlike MudRunner, in which the United States appeared only in the DLC, here you start in Michigan. And now the game does not have separate cards with the same tasks, but entire regions, each of which consists of three or four cards interconnected, and you can safely move with cargo from one card to another. Not only that, but some tasks also require this, sometimes it is more convenient to deliver cargo even within the limits of one card through the neighboring region. Autumn Michigan (4 maps) is followed by winter Alaska (4 maps), which justifies the name of the game, and spring Taimyr (3 maps + one should appear in the free DLC). Another region, the winter Kola Peninsula, should be released as part of the first phase of SnowRunner – Season Pass. In general, the combined SnowRunner map is 3 times larger in area than the common map of MudRunner and DLC American Wilds. But, and this is more important, it is much more interesting. 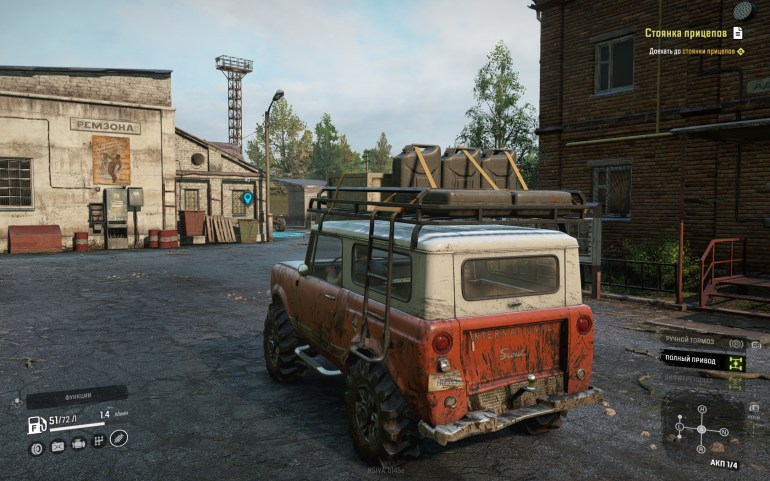 SnowRunner has become a full-fledged automotive RPG in which you must perform tasks of various companies and instructions of local residents, earn experience, buy or find new cars, improve and change the game world itself. In one of the first tasks of the game, you will be offered to help repair the bridge destroyed by the flood, delivering the necessary materials to it. After the bridge is repaired, the passage to the other side of the river will open, to your first garage and new assignments. To help clear the blockage, remove the collapsed support of the power transmission line, repair another bridge, cross the river, bring up supplies – thanks to your actions, the world of the game changes, more convenient drives from one part of the map to another appear, allowing you to move heavy trailers and large loads, new tasks and etc.

And the tasks themselves became more interesting. Not always is the delivery of certain goods from one point to another. Sometimes you need to get into a light jeep and try to climb onto a nearby mountain to open another viewpoint (hello Assassin’s Creed towers!), Take data from a weather station, find a lost car, or upgrade. Sometimes you need to deliver spare parts to a stuck and damaged car, repair it, refuel and drag it to the right place. Sometimes – to pull another loser out of the swamp, deliver the necessary trailer to someone, etc. A lot of work. The game has more than 200 missions and tasks, and it feels like more than 100 hours of gameplay. 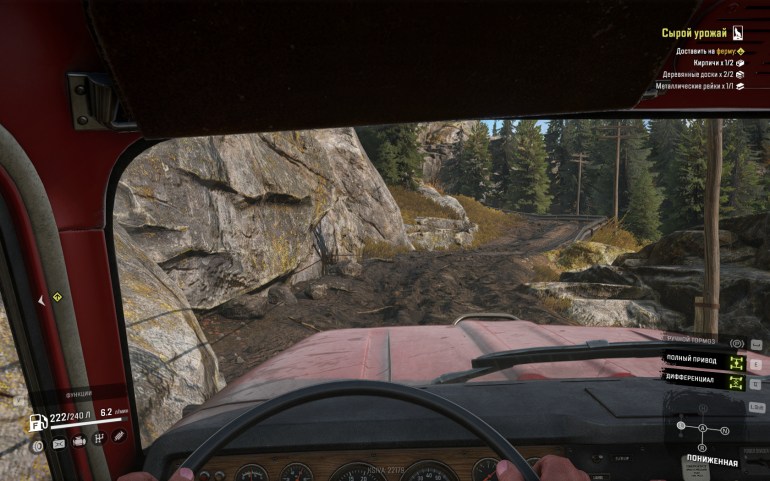 In addition to expanding the fleet, the number of trailers in SnowRunner increased by 25 versus 18 in MudRunner, and cargo versus 21 versus … 1, job types, etc. Not only that, now you can customize your SUVs and tractors, and changing not only the type of tires that really affect the patency but also adding improved versions of winches, more powerful engines, all-wheel drive, lower gear, snorkel, etc. Plus, purely cosmetic elements appeared, like sun visors, front and rear bumpers, rims, fog lights, etc. 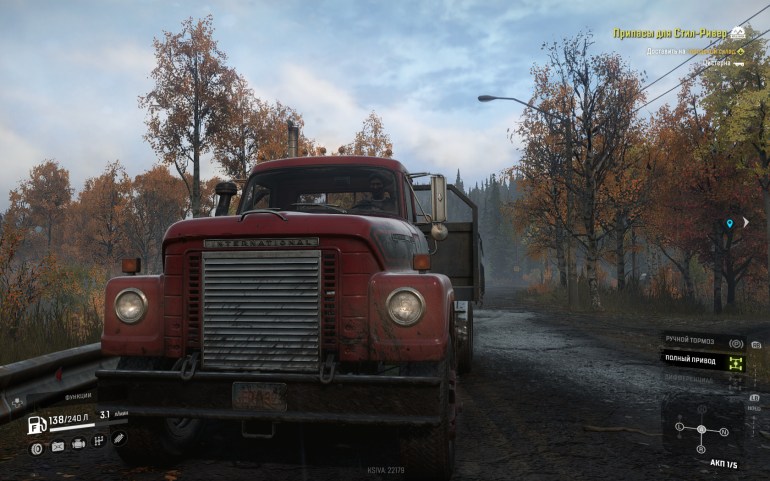 But most importantly, SnowRunner is incredibly interesting to drive, both delivering goods at the request of residents, and simply exploring the map. There are many interesting, obviously made with love places, and each road will be a test of your nerves and driving skills. Yes, one can argue how correctly the patency of one or another car is shown, how realistic the wheels intended for driving on dirt are on an icy freeway, and how correctly the rear left wheel falls into the dirt, but, to be honest, it’s still better than in the Spintires / series MudRunner / SnowRunner, it is not implemented anywhere.

Three-dimensional track in the mud that remains behind your car; damn realistic looking puddles and greasy even purely visual swamp; impassable dirt hiding under the snow; wheel potholes and potholes; logs fell on the road; floods of rivers that you can try to force on the rocks; how small trees bend and break if you attach a winch to them; the way your car is washed away by a stormy stream; how she slides down the wet slope … An unforgettable experience. Each completed task, each achieved goal brings incredible pleasure here. 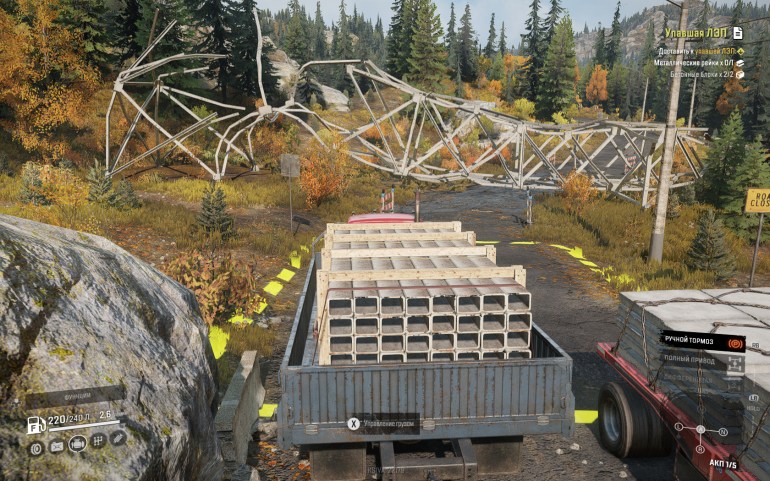 The only complaint I can make to the game is a certain amount of glitches. For example, after moving the car to the parking lot, every second time I completely turned off the control. Fortunately, going to the menu and reloading easily cures this problem. In addition, the behavior of machines on bumps raises some questions. As for me, both light SUVs and heavy trucks are too active “kid” on the bumps. However, recalling some videos from DVRs, it seems that this behavior is justified.

SnowRunner is perhaps the best off-road driving simulator available today. And even the fact that the game has become a little easier and friendlier to beginners, as for me, a positive sign. If the project attracts enough players, its updates, and a lot of interesting things are planned in the Season Pass of the first year, it will be regular and oblivion will not wait for the game. Yes, I almost forgot, SnowRunner, like the previous parts, allows you to connect custom mods, but only on EGS there is still no direct support for them, you need a separate registration on the mod.io modder site. 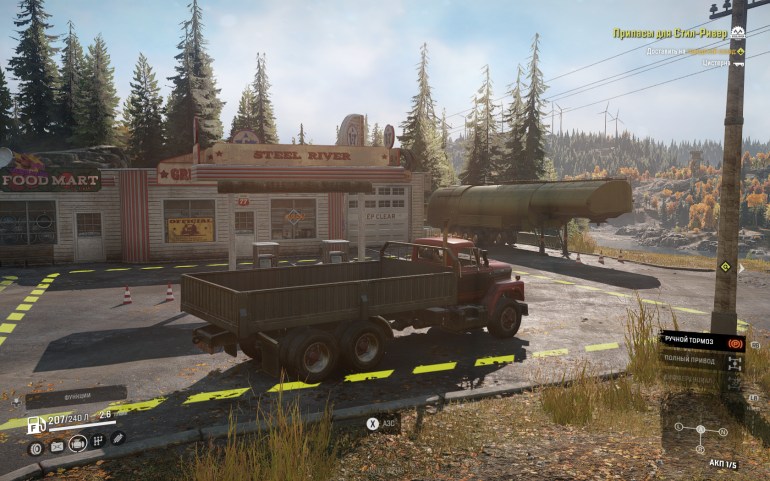 It’s a shame that a game like Spintires / MudRunner / SnowRunner was not developed in Ukraine, so something, but we also have enough off-road. I would love to ride an SUV in the Carpathians, in the marshes of Polesie, in the Chernobyl zone, in the Ukrainian Crimea, in the end. It is doubly disappointing because one of the first SUV simulators, the Expedition-Trophy on the Xpand Rally engine, was developed precisely in Kyiv. Well, all hope for modders.

GOOD: Improved graphics; increased size of cards; transitions between cards; varied and more realistic tasks; 40 American and Soviet cars, 18 of which are licensed; customization of cars; the game has become more loyal to beginners while maintaining a very decent level of simulation; hundreds of hours of gameplay; update program for the coming year
BAD: Some non-critical glitches; occasionally car behavior raises questions
CONCLUSION: Perhaps the best simulator for light and heavy SUVs today