After creating a character, move forward to a huge glowing stone, where the new ash. Kill the enemy, attacking his LKM. Jump over the pit, moving around the stone, and go to your partner.

Get out of the cave and talk to the storytellor to get the first task. He needs hammer and chairs, after which it will be possible to persist on ritual stones. On the way to first marker, move along the rocks on the left hand, then climb on a small protrusion to be in the right place. And yes, do not forget that, unlike Dark Souls, your character can rise to obstacles. 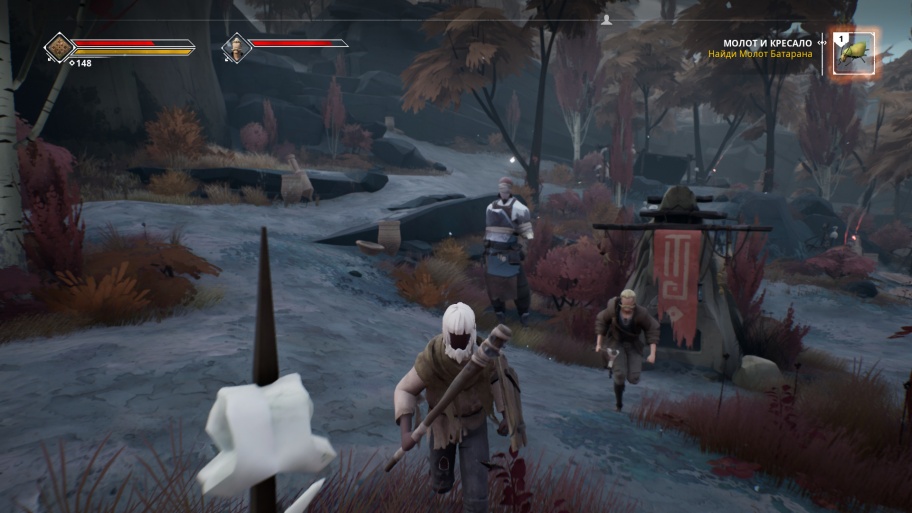 Baroran.
On the way you will need to learn to equip items – shield, spear and two-handed weapons. To switch between weapons, use the E key. If you have chosen a spear and want to dottut it, then you hold down the PCM, aim and release it. Also learn to capture goals – click on the mouse wheel, and dodge – the SHIFT key. Complete enemies kill on a simple scheme: Three impact of one-handed weapon by default, then roll back on Shift, and the last blow. By the way, the partner will help in battle.

When you collect the chairs, then go on the marker for the hammer. Following both items, follow the kestodel and give hammer. Apply the chairs on a ritual stone to build a “shelter of the tramp” city.

Move around the marker, dispense through the river using a large slant plate, on which there is an opponent with a shield. Jump on the other side, on the location of “uncomfortable hillock”. Talk to Batran and take a gift lantern. Open the door next to your partner and enter inside. Click on Q to get a lantern.

If you kill right. Then find a bowl with crimson juice. This will restore the pharynx in the flask. Go ahead where the shadow ran away, turn left and kill spider. The pit is the subject, and the right there is a narrow passage. Follow it and raise up a high wooden staircase. Collect Lout, go back to the place where they fought with spider, and go in the opposite direction.

In the end, you need to jump down. Here you will find a battle with the first boss – Ukkoto. Stay next to the partner, try to do so that he accepts the main damage. It is best to use two-handed weapons and attack a powerful blow through PCM. When Ukkoto begins to charge, then apply a few crushing shocks, and then bounce before the explosion occurs. 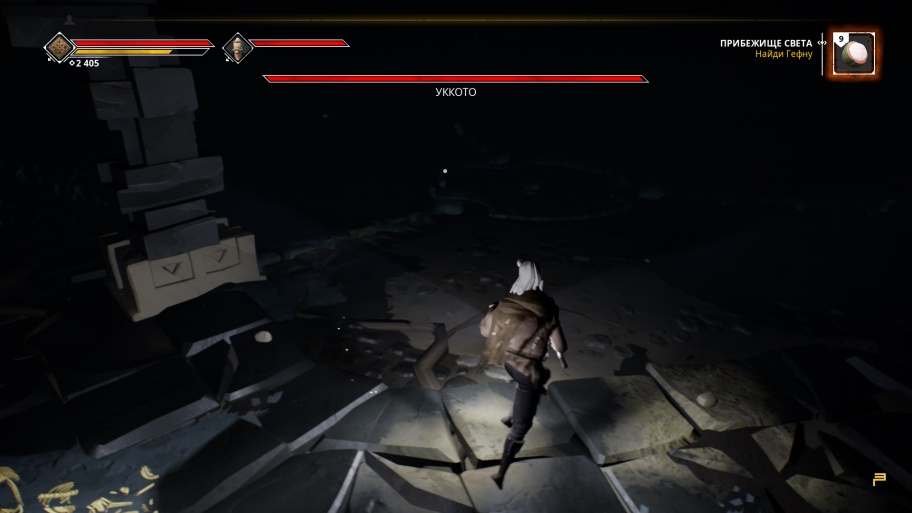 Ukkoto.
Winning, open the door and go through the only way. Talk to Amara and she will call Hephna. After communicating with her, Amara will move to the shelter. Before Amara, you can turn right and left. The way to the right will lead to the remains, the way to the left – to spiders and new clothes. When will be ready, then spend the remains to return to the shelter tramp.

Talk to Batran to complete the quest. He will prepare anvil on which you can improve weapons. Do it with selected one-handed and two-handed weapons. Improve everything to “genuine” optional. Please note that weapons can continue to improve, but more slag will be required.

Communicate with battle, then with Amara, after which we will study the weaving machine. Here you can buy a new relic (10,000 slag) and talismans for placement in it (1000 slag basic set). Bought or not, talk again with Amara and go to search for glue. It is nearby, but it so happened that the subject was found by us earlier. If you have the same situation, then immediately pass it to Amara and complete the quest.

The following task is taken from Bataran. Communicate with him and find out what you need to go to whispering lands, and the path lies through the storm ruins. In fact, you need to get to the needle ears, which is in the south, and find in the marked place to Stranger Eil. Job with it, then return to the bataran to complete the mission.

Talk to Batran to take this task. Thanks to the puppy you can now move between big ritual stones. Interact with the fact that is in the shelter of the tramp and move to the ridge of listening. Move through a small town, go down to the bottom. Narrow streets will attack opponents. You must get around the marker on top and get to them, following the east (with the right side of the map). This will detect the entrance to the Combie Amiren.

By the way, starting with the ridge of listening, you will be smart moss, which will be useful for further improving weapons. There is a lot of such moss in the tomb. Follow it, going down lower and below and destroy many opponents. In the end, it will be necessary to open a huge gate, followed by Amiren.

This boss is several times more than your character. Amirent will apply powerful blows, but at the same time its movements are slowed down significantly. Therefore, you will not be difficult to dodge and counterattack. After the victory over the dark talk to Silan. Woman settles in the shelter of tramps, and also suggest you quickly move there. It is much better than moving from the cave in the opposite direction!

Amiren.
Talk to Batran, then with Amara to give her subject. On this quest will be completed, but a new mission will begin – “Travel Light”.

The path of shadows

Return to the camp after the previous task and talk to Silan. Examine her table on which you can cook different potions, then talk again to complete this and start the following task.

The task is taken from Amara. You are interested in the same segment in whispering lands, where you need to use a spear and throw it in the statue. Move forward from one statue to the other and look at the left side. Literally in the same statue from the protrusion at the other end, to the left of the wall lies the sricot you need. Be sure to activate this task so that the screened is marked with a yellow marker. Having rolled her, go back to the shelter of the tramp and talk to Amara. 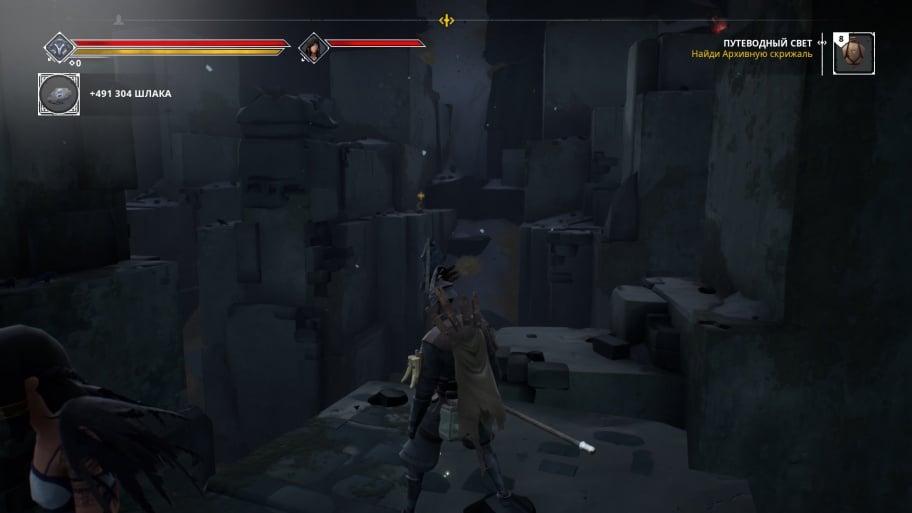 The location of the screened.

Move to the specified location and listen to the words. From now on, you can move to the statues with red light. Just think in such a statue of a spear and automatically find yourself next to her. To find claw, you need to overcome all the way, moving from one statue to another. If you fall down, then along the shore right back and retry the action. 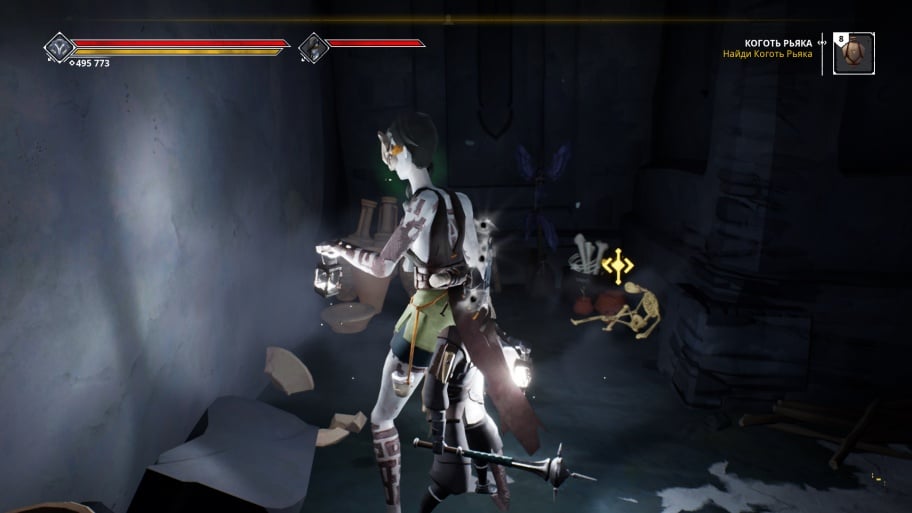 Claw location.
Claw is on the territory of the ruins, in the right. Move along the break on the right (when you find yourself in the desired area) and take it up to find the subject in the corner. Together with him, go back to the shelter of the tramp and talk to the Silan.

The task will be active after the completion of the quest “Claw of Ryak” and communication with Silan in the shelter of tramp. Go to the cave between Mare and forgotten canyon. Before leaving the cave in the direction of the forgotten canyon, where you need to throw a spear into a statue with a red light, look at the walls and find a niche with other articles. Move to them, and then throw a spear on a high platform in the center where the item needs you. Having touched it, go back to the shelter of tramps and talk to Silan. 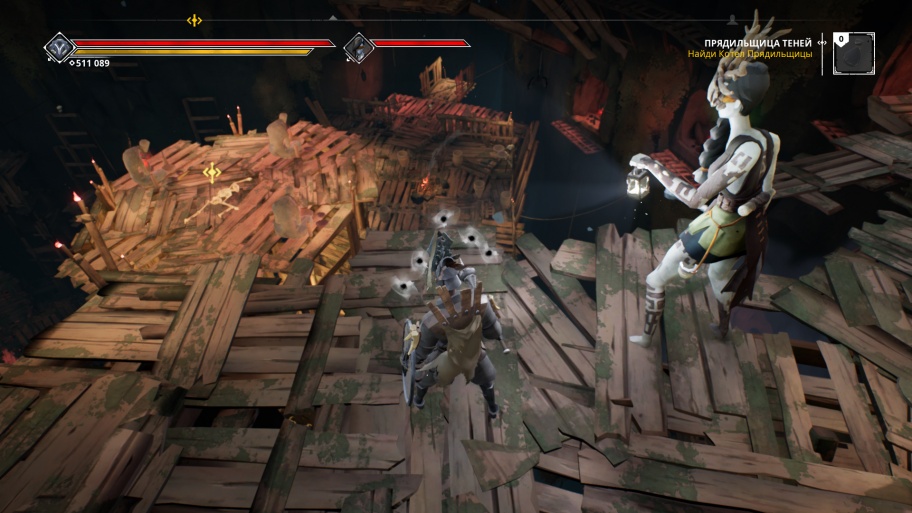 The location of the boiler spinners.

The following plot task will issue Amara. Talk to the girl in the shelter of the tramp and go to the fulfillment of the quest. Follow the specified location and from the ritual stone go down the slope. It is very important. This path will spend you through the cave and in the lake where Hepna lives. Talking with her, go back to the shelter of the tramp and in conversation with Amara, complete the task. 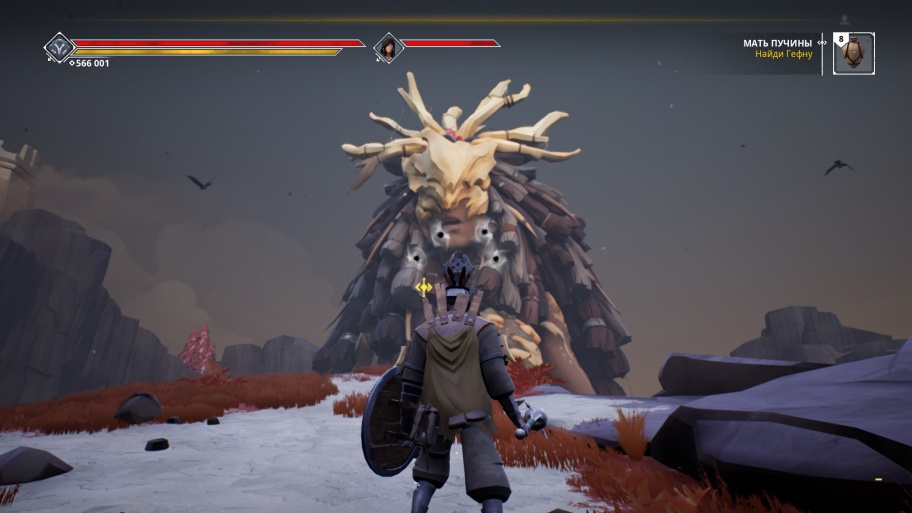 Move back to the palace and enter it, because Hepna has opened the way inside. Moving through the palace, destroy many opponents. The path will not be close, but in the end, you choose out and activate the ritual stone. After it on the steps side, climb upstairs, where Amara is waiting for you. It is the door behind it – it leads to a room with shadow ash. By the way, in the palace you could collect about four-five double smart roots, which are used to improve weapons.

Battle with shadow ash is not very different from battle against other enemies. You need to shy away from the attack of the boss in time, and also be patient. He has a lot of health glasses. After victory, talk to Amara. 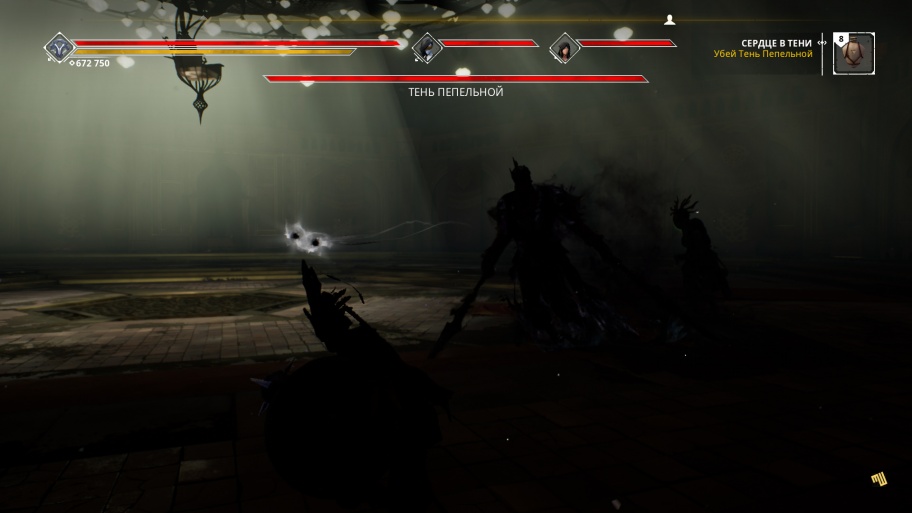 Shadow ash.
Go further, jump into the portal and move in a new place to meet with Hephina. On the way it will be necessary to defeat many opponents, and some parts follow the water to overcome. Far from leaving, otherwise the character will start sinking. Talking with Hephina and giving her a heart, return to the shelter of the tramp and talk to Amara. Next, talk with Batran to start the final task.

Go to the cave located near the waggent shelter, enter inside and move inland until you find the venue of the ritual. Talk to comrades and watch video. Fight Silan, after which you defeat the spinner of the shadows to complete the passage of the game. 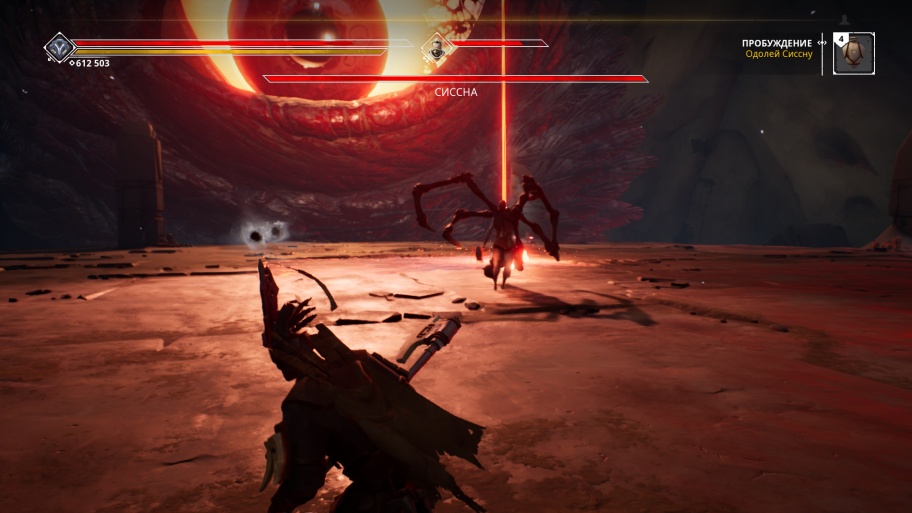 Safety in the wind (Side Task)

Talk to Yokell and find out what he wants to find brother and father. Move on the marker to the specified location, and next to Lake Yokell will join the main character. Rear to the high ledge by clicking on F, pick up the chest of aho. Return along the path on the map in the shelter tramp. On the way you can pick up the subject from the column in the water. These bones allow you to quickly return to ritual stone. In the water, the main character can drown, so pick up the fence, go through it and with overclocking, jump into one, and then – to another column where the subject lies. In the same way Return back.

Returning to the shelter of tramps, talk to Yokell. Give him a chest aho. You will receive an award object that allows you to heal health. By default, there are three charges, but you can find materials and talk to Yokell to improve health glasses recovery. To replenish charges you need to interact with ritual stone. Enter the building near and see that to increase the number of sips from three to four you need to pay 1600 units of slag. Now you have them. This will lead to the completion of the quest.

Talk to Yokell again to take the following Quest Chain Mission. Follow the marker across the river and talk with a pile sitting on the top of the cliff. Agree to fulfill its task, but at the same time you will deal with this quest. Return to the shelter of tramps and report this yokell.
12